This is the 2nd of 4 installments in the NYC blog series.

We have been on the ground in New York for three days. The sparse hotel room – a realtor would call it cozy – opened out to the fantastic view of another hotel. I guess we really shouldn’t be too surprised by this. Manhattan is a place where every inch of space is accounted for and coveted.

I don’t bother showering – that’s for the night. No point when you walk outside, and you immediately start to sweat with the humidity. You see, New York is a concrete jungle. Literally. Outside of the occasional tree and Central Park, of course, there isn’t much green space to be found. So the sun beats down into the concrete. It makes it hot.

The skyscrapers seem to do a great job in blocking out the wind as well.

Today we’re headed to the southernmost point of Manhattan. The plan is to see the One World Trade Center and the 9/11 memorial. This is of particular significance to us because of the connections which both Chant and I have to firefighters.

For me, my youngest brother recently graduated from Fire Paramedic training, and one of my best friends has been in the service for six years. For her, firefighting is in her blood. There are a lot of firefighters in her family.

The memorials themselves yawned into the ground, a pair of massive chasms into which water continuously flowed. Around the perimeter were etched the names of all the victims of the terrible attacks on September 11, 2001.

There are a few dates which are always etched in my memory in perfect clarity. One of those is 9/11. I was in grade seven at the time, playing basketball outside when I realized that something was wrong. There were fewer teachers around than usual, and the ones who were around seemed distracted.

Eventually, we were called into the auditorium where we were told that school was done for the day. Time to go home. I remember pulling aside the sciences teacher and asking what was happening.

“That’s something you should talk about with your parents,” she had said. That didn’t seem fair to me. If it was important enough to stop school, didn’t I have a right to know?

When I got home, the television was tuned to CNN. My grandmother was ironing in the family room, watching the replay of the two towers tumbling to the ground in a loop as various CNN personalities tried to make sense of what had happened in Manhattan that morning.

For the next week, there hadn’t been a single plane in the air. It was eerie how much you miss them in the sky when they’re not there.

That was the last thing I remembered from that day, I think.

Fast forward twenty years and I was walking that ground where once the towers had stood. The museum had steel from the towers on display, rusted and mangled almost beyond recognition.

There were burnt out firetrucks and monuments to the resiliency of the United States. Then we went into the victim’s memorial, and my heart broke.

It’s easy, I think, to disassociate yourself from these kinds of things when they happen on such a large scale. Of course, it’s a tragedy, but it’s tough for the human brain to associate that huge number of deaths with actual, breathing people.

The memorial does just that. It showed personal objects from the victims and combines them with the tragedy. Seeing the etch-a-sketch that said “I love you, daddy,” or the jewelry of a woman who had survived the very first attack on the WTC back in ’93, who hadn’t wanted to go back but had anyway eventually only to die in 9/11.

I don’t think there was a person in there who wasn’t affected in one way or another.

Afterward, we went to the Brooklyn bridge. It took the better part of two hours to find the entrance, but we went up. I had heard that you could see the Statue of Liberty from there.

Sadly, I was disappointed. The bridge itself was pretty neat, though! 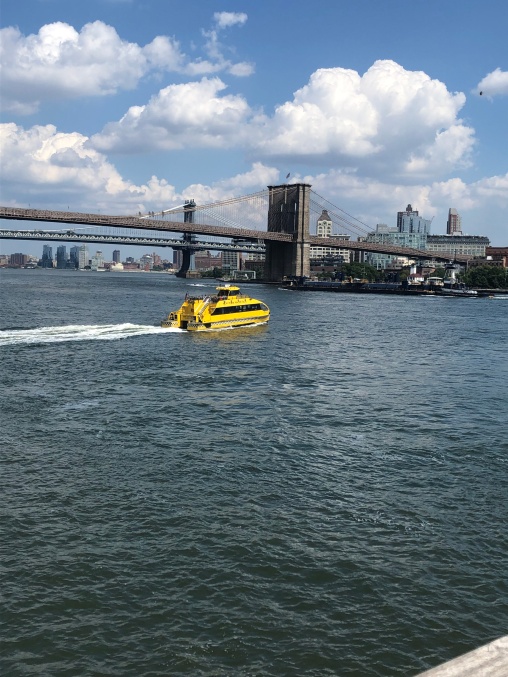 I think after that we were both pretty done with sightseeing. It was an emotional day, but a good one! At night we went to a steakhouse located about three blocks from the hotel. I’d like to say that I reserved the restaurant, but that would be expensive and impractical. We were the only people there, though. It was kind of neat – the waiter wasn’t ever far away, so we drank an entire bottle of wine without ever lifting the bottle. Every time a glass would get close to empty, he was there to fill it up again. Swanky.

It was a pretty good steak, too. That’s one of the best things about New York – everything that you could ever need is probably located within five blocks from you at any given time. I was perhaps a little underdressed – I had shorts, and the waiter was all tuxed up, but it didn’t matter.

The conference begins tomorrow (editor’s note: I am publishing this many weeks after the conference ended). I’m excited! I’ve got high hopes for this. Cross your fingers, and maybe even your toes, for your boy. I could certainly use the karma. I mean, I’m thinking positively because how you think affects how you act, but that doesn’t mean I don’t want people in my corner!

It doesn’t seem right to make a top 5 list for this post. Don’t worry, it’ll be back for the next ones.