My second book is done. It’s been done for a while now. We are sitting strong at 67 000 words, which is approximately the same size as Far From Ordinary when it went to the presses.

Ten years later. More revisions that I’m proud to admit to. But there it is.

The characters are feeling developed. The themes are there, woven into the story. The writing is as strong as it’s going to be. I’ve even written “the end”

“So when can I buy in?” I can hear you thinking, hopefully.

The truth is that even though it is done, it’s not finished. Couple things here:

1 – Big ups to my beta readers! The first wave included my brother and a few people who I met on Twitter. Their feedback has been instrumental in shaping what the manuscript looks like today.

(Sidebar! It’s amazing how the internet connects people. When I was a kid it was all about not talking to people online. Now we use the internet to summon strangers to pick us up in their cars and to find people to date.)

2 – There is a certain point where you need to give up the ghost and call the novel finished. Otherwise, I’m going to be tinkering with this thing for the next ten years of my life.

3 – That point hasn’t happened yet.

I think that the flow needs to be better. I think that I need to define the main antagonist more, make him or her more human, more relatable.

You don’t get the evil Dr. Claw type villains anymore, after all. In order for your audience to believe in your antagonist as a character, you need to give them motivation – something that makes sense so that the people reading go “Oh, that’s why!”

Take Thanos, for instance. He’s not after the unbelievably vague goal of universal domination. He doesn’t even want to rule. He just wants balance, for the natural order of nature to be reset.

Click on the above link at your own peril – there be spoilers.

The more you humanize your villains, the more people will relate to them. I need to give mine MORE of this.

That is something that I needed to improve on with Far From Ordinary as well, but maybe that’s not a road I should go down right now.

Finally, I need to figure out how to finish the book. For a little bit of context, the idea for Fade to Black came to me way back in 2010, which means I’ve been writing it for almost 9.5 years.

No matter what I had going on I would always come back to it, chipping away slowly across the years. Over the years my idea of what the ending should “look like” changed when I thought about it.

The version of Microsoft Word which I used changed a few times as well.

Look for Fade to Black in bookstores and places of ill repute soon. Hopefully.

I stumbled into an organized running event this morning. Literally just stumbled upon, not like the time where I was having a few drinks and was convinced to run in the Manitoba Marathon the next morning.

I was jogging with my training partner and this race started up out of nowhere. Like, literally out of nowhere. It was a quiet Sunday morning and then there were a whole bunch of people who looked like they were in midseason form emerging from the path across the road.

So what else could we have done? We joined the race. Running is so funny that way. You’re alone for 99% of the time, so it’s a solitary pastime. So what do we do on a race day? Line up on the side of the road and cheer on these people who are pushing themselves if not to the point of exhaustion, at least the point of chaffing.

And let me tell you: chaffing ain’t no fun. 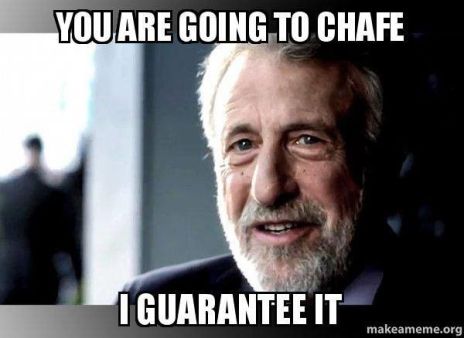 It was pretty awesome to have people cheering us on and, if they were suspicious of our lack of BIB numbers, no one said anything.

I had to kick up my running pace a bit as well. The human body works wonders that way. I can feel like I couldn’t take another step, but as soon as someone is cheering me on I can dig in a bit deeper and push myself farther.

Running sucks, but it’s better when there are people around.

Pretty sure that, going forward, I only want to jog if people are standing by with water every couple of kilometres.

Also, the faces of the volunteers when we jogged off the trail was priceless.