Happy New Year! I hope that the Holiday season was kind to you. Remember, as a wise man once said – it’s not about what you ate between Christmas and New Years Eve that matters; it’s what you eat between New Years and Christmas.

Man, I ate a LOT between Christmas and New Years, though. Mikey needs to hit the gym. I mean, I need to catch my quota of 3 times a week year! May as well get them out of the way early.

Anyway, after New York, I remember talking pretty often about timelines. How long it should take for someone to circle back to me after I submit material. Specifically, when that material is requested by an agent.

I don’t have a lot of experience (read: no experience) when it comes to that kind of thing, so I went off the example which was given to me at the conference. The featured writer, who got signed last year, was called on Christmas Day with some good news – an offer of representation.

That seemed like a pretty decent date. Enough time for them to read the entire eighty thousand word manuscript, show it to whoever they have to, and draft up some paperwork.

And yet, Christmas Day came and went, and my phone stayed silent. I mean, not literally, I sent (and received) a bunch of Merry Christmas (and a few Murray Christmas, because we are talented and awesome) texts. But no agents.

Today I poked the bear. I sent a bunch of emails to the effect of “Hey, yo! What’s going on?*”

The thing is, I’m okay either way. I would love to get an agent, and it is the next logical step for me, but it’s not the end of the world if it doesn’t happen right now. It’ll happen when it happens, and I’m at peace with that.

Truthfully, I think that there’s a lot of work I need to do with my craft first. Which brings me to the MasterClass

Recently I signed up for an all-access pass to MasterClass. You’ve probably seen the ads before – you learn from experts in the field. Anything from learning to cook with Gordon Ramsay (He doesn’t yell nearly as much in his MasterClass) to dissecting the art of negotiating with former FBI analyst Chris Voss.

There’s literally hundreds of them, a good dozen or so which are all about writing. I picked the Neil Gaiman one to watch first because I’ve heard good things.

Oh man, it delivered. If you don’t know who Gaiman is, you probably know some of his works. Coraline. American Gods. The Graveyard Book. Among others, of course. All you have to do is read some of his prose to understand the man’s immense talent.

Hearing him talk about it, though? Watching Neil Gaiman talk about writing just makes me very aware of how limited my skills are, like a peewee hockey player trying to keep up with a battle-hardened NHL vet.

Yeah, PeeWee might be good in his division, but if he has to go up against a real pro, he is going to lose 10/10 times. Which is good, because the only way I’m going to continue to grow is to stick to it, and try to find what makes Gaiman tick.

Stephen King talked about establishing a curriculum vitae in his book, On Writing. Neil does the opposite, relying on the strength of the words on the page to command his audience’s respect. And then he talks about why it’s important.

It’s enthralling and effective. I know this because I started writing my next book yesterday. So, full disclosure, it’s not a sequel. That’s often what people ask. “When’s the next one coming out?”

I don’t know why I haven’t started on a follow-up to Far from Ordinary. I write what I want to write about, I guess, and I’m not ready to start a project like that yet.

It’s okay, though, because I have a helper. 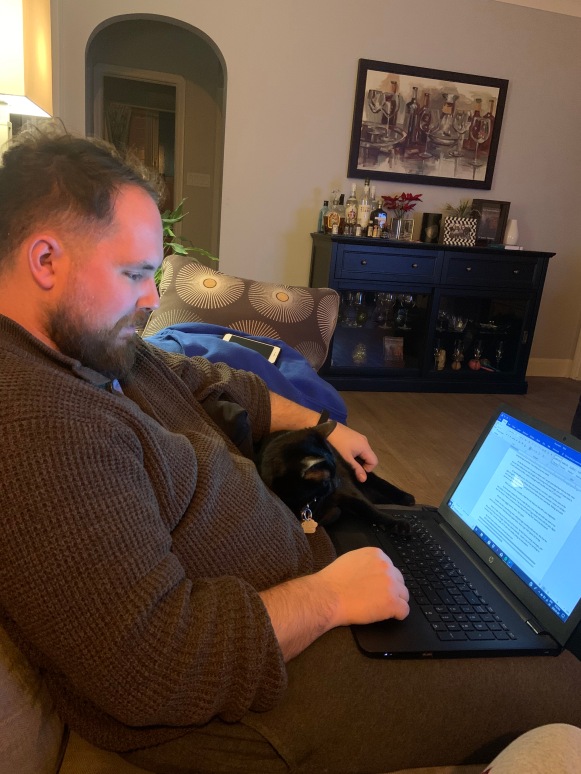 Otis the Khajit jumped up yesterday, probably sensing the brilliance which was emanating from my fingertips onto the proverbial Blank Page. He was helping, he swears!

I attended a fellow indie author’s book launch in December. It was interesting for a couple of different reasons. First, it cemented my belief that that kind of thing should be held in a bar. Period. It also made me think about my own motivations. This author firmly believed that his book was a one-and-done. I mean, I guess if you’re writing non-fiction, and specifically self-help non-fiction you kind of tap out on ideas pretty quickly.

(This is also why I don’t understand or trust when “self-help” gurus like Tony Robbins manage to write more than one book. Holding out on us are ya, Tony? Or is there just THAT much hot air?)

It also cemented my belief that Amazon was the best path for me in my own novel pursuits. It worked best for me and my specific needs while shaving a solid $6 / book off the print price. Cheaper books mean I can sell them cheaper, too. Everybody wins!

That being said, if you know of a library/book store who is looking to stock up on books, feel free to name drop me!

What did we learn this week? Year? I don’t know, man, the days have only just started making sense again after the holiday season.